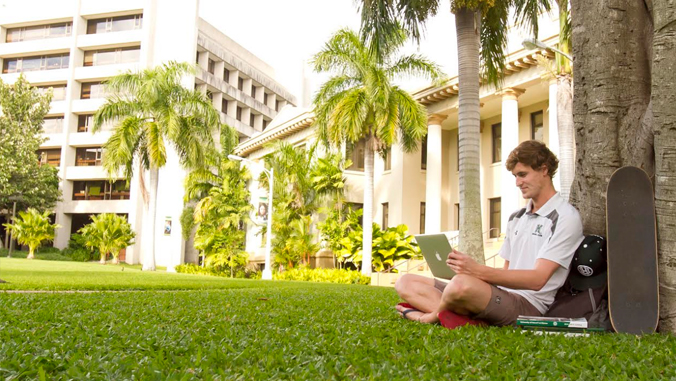 The University of Hawaiʻi in May became the third higher education system to join the Interstate Passport Network, which is a national program of two- and four-year colleges and universities that allows for an easier transfer of students.

Leeward Community College and the UH West Oʻahu were already part of the Interstate Passport Network that was created by the Western Interstate Commission on Higher Education (WICHE). The eight remaining UH campuses now are part of the program that includes 40 educational institutions from around the country.

“The University of Hawaiʻi System is delighted to join the Interstate Passport network,” said UH President David Lassner. “UH faculty, staff and administrators have been early participants and implementers in shaping the initiative and, after seeing its value, all 10 of our campuses are enthused about its potential to assist transfer students and shape our thinking about general education.”

Since the Interstate Passport Network launched in 2016, member institutions have awarded more than 38,800 Passports.

“With the University of Hawaiʻi System becoming an Interstate Passport member, more of our students’ coursework will be safe-guarded should they need to transfer to any of the growing number of other Network colleges and universities,” said James Goodman, Hawaiʻi Passport state facilitator and dean of arts and sciences at Leeward CC.

Nearly four in 10 college students will transfer institutions at least once during their college careers, and almost a quarter of those will enroll in an institution in another state, according to data from the National Student Clearinghouse. Transferring between schools—especially across state lines—has been difficult and sometimes expensive because of lengthy credit evaluation processes and loss of credits already earned.

“UH has been a key contributor in the development of Interstate Passport processes and operations. Leeward Community College and the University of Hawaiʻi West Oʻahu have been instrumental in paving the way for the remaining institutions to join the Network,” said Anna Galas, director of academic leadership initiatives at WICHE. “As the Interstate Passport Network continues to grow, we expect to see more transfer students motivated to complete their degrees.”

Interstate Passport is a program, based at the Western Interstate Commission on Higher Education (WICHE) that facilitates block transfer of lower-division general education attainment based on multistate faculty-developed learning outcomes among its participating institutions. After years of research and development, the Interstate Passport Network, whose members are two-year and four-year regionally accredited public and private non-profit colleges and universities, was launched in July 2016. Member institutions began awarding Passports in the 2016–2017 academic year.