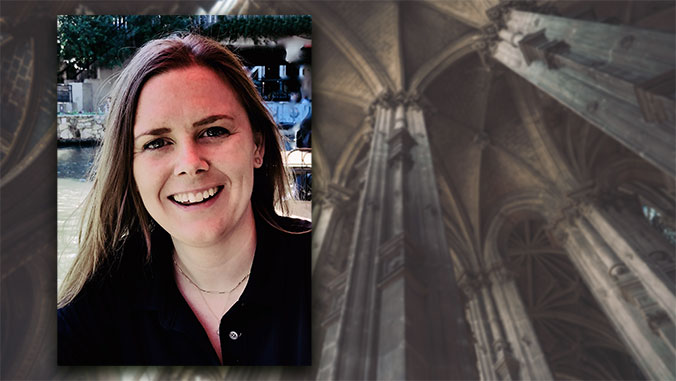 A new musical genre with a centuries-old sound is sweeping YouTube, and a University of Hawaiʻi at Mānoa professor is featuring it in her courses.

The trend called “bardcore” involves musicians transforming pop songs into a “medieval” style. It took off as people who like to play with music on their computers stayed home due to the COVID-19 pandemic. “Bardcore” has only been around for several months, but videos from Cornelius Link, one of the originators of the genre, have each received more than four million views.

UH Mānoa Music Department Assistant Professor Elina Hamilton, who specializes in medieval music, said it is common for music and art to reflect the medieval time period. Hamilton said examples include composers like Richard Wagner turning to medieval subjects for his operas; painters and artists, led by people like William Morris, were inspired from the plants and creatures featured in medieval manuscripts; and recent film series such as Harry Potter and The Hunger Games.

“The medieval world can be the otherworld escape that we long for when we want something different from the present,” Hamilton said. “Artists, and then consumers, might turn to the medieval period repeatedly because they are wanting to escape from a world that is less desirable, or just need something that reminds us of a long-standing tradition.”

Although “bardcore” is a very new genre, Hamilton was quick to integrate it in her classes. She has already introduced an assignment in her MUS 265 course requiring students to find a popular song that they think could be turned into a medieval-style pop song.

“One of the aspects I try to reiterate with my students in class is that people were people in the Middle Ages, just like people are people today,” Hamilton said. “I know this seems obvious, but sometimes we forget this when we study history. When we observe the images they left behind, the music they thought was worth preserving, and stories they told and retold, we acknowledge that they had troubles and victories, and plenty of escapism too.”

“I have always found the lyrics of this song somehow timeless, and enjoy the way that the arranger has changed the words to reflect an early modern English style that we think of as ‘ye olde,’” Hamilton said.

College of Arts and HumanitiesCOVID-19musicUH Manoa