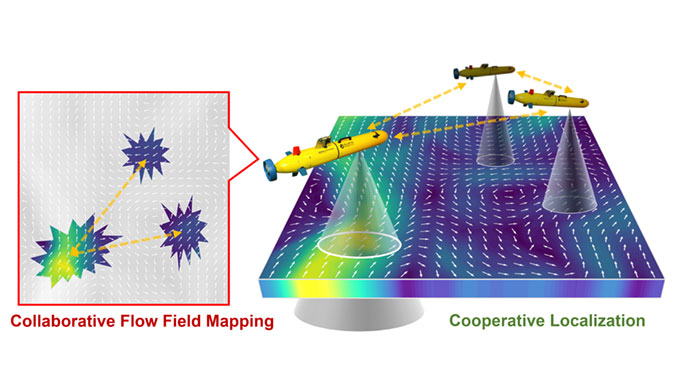 Underwater mobile robots continuously collecting data for research are key to a University of Hawaiʻi at Mānoa College of Engineering research project that seeks to significantly enhance the study of the world’s oceans. Led by Assistant Professor Zhuoyuan Song, the project is funded by a $394,750 grant from the National Science Foundation (NSF) National Robotics Initiative 2.0: Ubiquitous Collaborative Robots (NRI-2.0) program.

Oceans provide many benefits on Earth including regulating weather patterns and maintaining a stable temperature that allows life to thrive. However, the knowledge of our oceans is limited due to a lack of underwater observational data.

The use of underwater robots is gaining traction to increase the breadth of data. But, their effectiveness is limited because radio frequency signals do not work well underwater and relying on inertial sensors (sensors measuring the acceleration and rotation of the robot with respect to a reference frame that is neither rotating nor accelerating) alone may result in “drifting errors,” which may accumulate.

How the robots work

UH’s underwater robots will use a combination of algorithms, developed by Song, inertial sensors and ocean current forecast maps, so the robots will be able to manage their own location.

This method alone, however, poses an issue since the robot likely will not be able to pick up on significant enough changes in ocean currents. To combat this problem, Song plans to team up robots with each other through cooperative localization.

“Imagine if one robot has a better localization performance than its teammate, it can behave as a beacon for others by telling others where it is and allowing others to measure their relative displacement with respect to itself,” Song said. “This way, each robot is sharing location information with its neighboring robots, as well as measuring relative displacement with respect to their neighbors. This mechanism allows the team to better overcome the drifting error of the inertial sensors.”

Song hopes the robots will collect ocean current velocity data over space and time, and other scientific data such as water temperature, salinity and more. The data is critical to our understanding of the ocean’s past, present and future.

Song plans to use commercially available robots, for example BlueROV2 and REMUS 100, and adapt them with inertial sensors and upgraded processors. Eventually, he plans to conduct tests off Makai Research Pier in Waimānalo and at Kilo Nalu Nearshore Reef Observatory off Kewalo Basin Harbor.

The project will benefit research areas including oceanography, marine ecology and meteorology. It will also create opportunities for STEM students, especially Native Hawaiians, to recognize the potential of robotics, gain experience with marine robots and participate in cross-disciplinary research activities. Two graduate students will be supported by this project to conduct thesis research and attend annual international conferences. Research opportunities for undergraduate students will be created to participate in the preparation of the robots and field deployments. Song will also integrate the research outcomes into a new graduate course on probability methods for autonomous mobile robots.

Support for the project is jointly provided by the National Science Foundation NRI 2.0 program and the NSF’s EPSCoR co-funding program.

The original NRI was unveiled by former President Barack Obama in 2011 to keep the U.S. at the cutting-edge of robotics technology. The NRI-2.0 program builds upon the original NRI program to support fundamental research in the U.S. that will accelerate the development and use of collaborative robots.