Works by animation students in the University of Hawaiʻi at Mānoa Academy for Creative Media were featured at a virtual film showcase, September 25–28. The Cultural Animation Film Festival (CAFF), hosted by the Honolulu Museum of Art Doris Duke Theatre, highlighted unique animated films based on diverse cultures.

Flight by senior Nalu McFadden-Rios and The Girl and the Kappa Monster by spring 2020 graduate Gavin Arucan were featured in a showcase of animated films for kids. Flight is about a young and lonely seagull who seeks friendship, but due to her inability to fly and concerns of leaving the safety of her buoy, she finds it difficult to meet others. However, after an encounter with a beluga whale, the seagull realizes that leaving her comfort zone leads to new friends.

The Girl and the Kappa Monster is about Hiriko, a lonely, young Japanese woman, who develops a close friendship with an injured kappa monster, but it takes a stronger grip on her life than she would like. 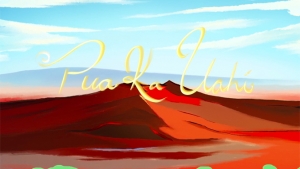 Pua ka uahi by Kalilinoe Detwiler, a current MA student in English and spring 2020 graduate in English and creative media, was spotlighted in CAFF’s opening night celebration, along with Arucan’s The Girl and the Kappa Monster. Detwiler’s film is about Pele, a young and hot-tempered volcano goddess, who has been challenged by Kamapuaʻa, a shapeshifting trickster in a race around Hawaiʻi Island.

“CAFF is a kaleidoscopic event that brings artists from around the world to Hawaiʻi and opens communication between these cultures,” Detwiler said. “It was a valuable opportunity for me and my fellow animators from Hawaiʻi to learn about stories outside of the Pacific as well as for filmmakers from all over, including Australia, Europe, and Asia to see Hawaiʻi-based films.”

Inspiring a new generation through culture

Detwiler was one of four panelists from Hawaiʻi, Australia and the Netherlands in a talk story session at the end of the opening night celebration. “Guided by Hope: Cultural Inspiration for a New Generation” was moderated by Cheng-Cheng Li, a UH Mānoa PhD student in political science and graduate degree fellow at the East-West Center.

The panelists discussed issues related to their own cultures. Detwiler conveyed that her film, Pua ka uahi, aimed to open a conversation about ethical indigenous storytelling practices when representing an indigenous culture on screen.

“I wanted young Native Hawaiians to see themselves on screen, to relate to these characters, to get the jokes and allusions, to hear their own language being spoken, and to know that their moʻolelo (story, legend and history) can go beyond Oceania by adapting culture to technology and new forms of communication,” Detwiler said. “My film isn’t unproblematic, but it is a series of careful choices and a step toward ethical indigenous storytelling through the practice of kuleana in the pre-production, production and post-production stages.”

Detwiler added, “When we seek to communicate our stories across cultures, we grow as individuals who must now make choices based on those audiences while also inviting them to learn about our culture and how it’s evolving.”