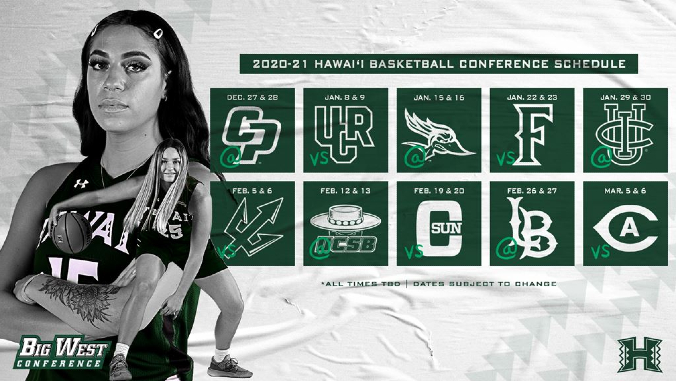 The University of Hawaiʻi at Mānoa women’s basketball team’s modified schedule for the 2020–21 season was announced by the Big West Conference. Subject to any necessary state and local approvals, all 11 member institutions will play 20 conference games under a modified format that will reduce travel and emphasize the health and safety of student-athletes, coaches and staff.

Conference play will commence with back-to-back games on December 27 and 28 as UH opens on the road at Cal Poly.

During the 11-week period, teams will play the same opponent on consecutive days at one site, with the majority of games taking place on Friday and Saturday. Games will not be rescheduled should a team need to quarantine during the season. Tie-breaking procedures, which will be announced in the coming weeks, shall be utilized at the end of the regular-season.

All teams will begin the season without spectators in attendance per the direction of the Big West Board of Directors. The issue of fan attendance will be revisited as the season progresses.

“The Big West Board of Directors did due diligence in examining all of the factors involved in a safe and responsible return to competition, with basketball being the pilot moving forward,” said Big West Commissioner Dan Butterly. “The Big West Conference understands the need for consistent and multi-layered levels of testing protocols that put safety at the forefront for our member institutions. Cognizant of state and county restrictions, and the NCAA Core Principles of Resocialization of Collegiate Basketball, we feel we have a plan in place that will adhere to those mandates.”

UH‘s non-conference schedule will be announced at a later time.