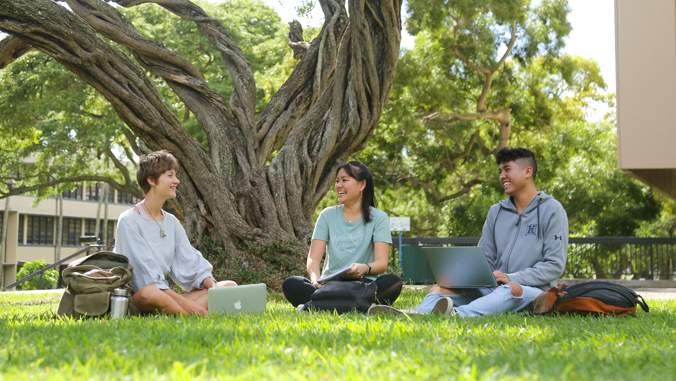 University of Hawaiʻi at Mānoa students reported higher rates of satisfaction and positive university experiences, according to recently released results from a prominent national survey.

The National Survey of Student Engagement (NSSE) collected valuable information in February 2020 from UH Mānoa freshmen and seniors about their participation in activities and programs that promote their learning and development. Since 2000, more than 1,650 institutions administered NSSE and six million students responded. In 2020, approximately 1.8 million students from 601 institutions were invited to participate, and nearly 500,000 students responded.

The 2020 NSSE results showed 81% of UH Mānoa freshmen and 78% of seniors evaluated their entire educational experience as “excellent” or “good” compared to 66% and 71%, respectively in 2015, when NSSE was last administered at UH Mānoa. In addition, 83% of freshmen and 80% of seniors said “definitely yes” or “probably yes” when asked if they would choose UH Mānoa again if they could restart their educational journey, compared to 69% and 70%, respectively in 2015.

“A record-high NSSE survey participation rate and improved student satisfaction scores are a wonderful recognition and testament to the great work by UH Mānoa’s faculty and staff,” UH Mānoa Provost Michael Bruno said. “We must now use the NSSE data to continuously improve student success.”

According to the Mānoa Institutional Research Office (MIRO), UH Mānoa completed its collecting of NSSE data at the beginning of March 2020, before the campus closed due to COVID-19, making it possible to get reliable and comparable survey results without COVID-19 impacts to students’ response behavior and survey results.

After a nine-month survey marketing plan led by MIRO, UH Mānoa achieved a record-high survey response rate of 52%. The response rate of the same tier of institutions (undergraduate enrollment higher than 10,000) that administered NSSE in 2020 was 23%.

UH Mānoa continued its significant response rate improvement over the past two surveys in 2015 (32%) and 2011 (16%). MIRO credited the higher response rates with UH Mānoa’s increased efforts in seeking students’ input and feedback for continuous improvements, as well as a campus-wide interest and application of the NSSE survey data.

NSSE asked students other questions including about their participation and work in their courses, how their institution has helped to improve their skills and knowledge, and how they spend their time outside of the classroom. Consistent with 2015 findings, in 2020, UH Mānoa students reported higher rates of the following categories compared to NSSE peer groups (calculated based on similar institutional characteristics):

NSSE is administered by the Center for Postsecondary Research based at Indiana University Bloomington. MIRO has developed several data tools to disseminate the NSSE data among UH Mānoa faculty and staff, and will host online informational sessions on January 28th. For more information about UH Mānoa’s NSSE survey project and data sharing sessions, visit MIRO’s website.

This effort is an example of UH Mānoa’s goal of Enhancing Student Success (PDF), one of four goals identified in the 2015–25 Strategic Plan (PDF), updated in December 2020.