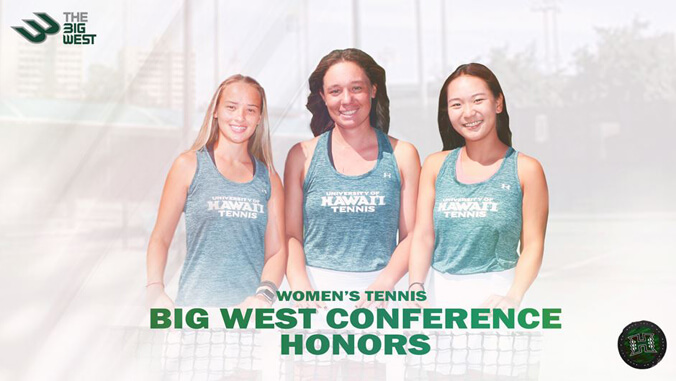 Romain was strong all season, finishing with an 11-5 dual match record while going 6-1 in the Big West. She went 7-2 when playing at the No. 1 position and 4-3 at No. 2 in singles. She closed out the season winning eight of her last 10 matches including the last three-straight.

In doubles, Romain and Takamura recorded a 5-4 dual match record while posting a 2-1 mark in conference. They played the majority of their matches on the No. 1 court, where they tallied a 4-4 record. This is Takamura’s second-straight season earning All-Big West Second Team honors in doubles.

It is also the second-straight season that Takamura has been named All-BWC Honorable Mention in singles. Overall, the junior concluded the season with a 9-9 overall record and a 6-3 mark in the Big West. While playing in the No. 2 slot, Takamura went 6-3 and 3-6 at No. 1.

Freshman Vilcek made an immediate impact since joining the team in January. She finished with a 9-5 dual match record and a 5-2 mark in the Big West. She primarily played on the No. 3 court where she went 8-3 for the season.