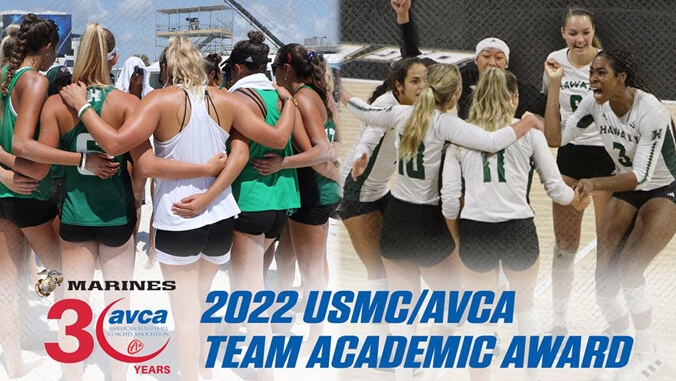 The UH indoor and beach squads are among more than 1,200 teams to earn the AVCA Team Academic Award. The U.S. Marine Corps /AVCA Team Academic Award honors collegiate and high school volleyball teams (men/women, boys/girls, indoor/beach) that display excellence in the classroom during the school year by maintaining at least a 3.30 cumulative team GPA.

The BeachBows had a 3.36 average during the school year, while the indoor squad posted a stellar 3.45 team GPA. UH is the only Big West squad to be recognized by the AVCA on both the indoor and beach sides.

The beach volleyball team is coming off an outstanding spring campaign in which it earned its fifth NCAA bid. The indoor team, which claimed the Big West Conference title and advanced to the NCAA Second Round last season, will open its 2022 fall campaign with the Texas A&M Invitational, August 26–28, in College Station, Texas.