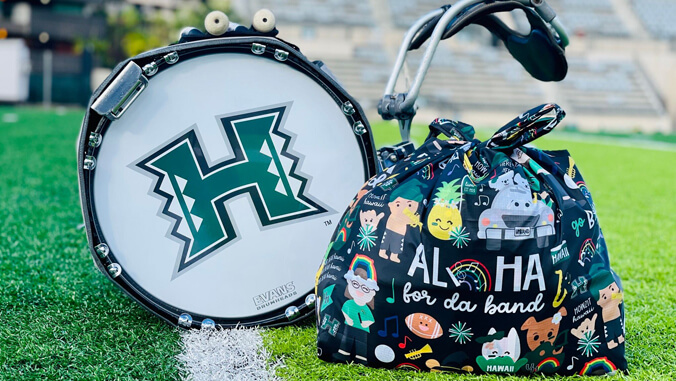 From bentos to tote bags, supporting the University of Hawaiʻi at Mānoa “Rainbow Warrior” Marching Band is at the heart of one of its super alumni.

In 2019, Bryson Dang, who owns Eden In Love boutique with his wife, Tanna, treated all 250 band students to bentos and watermelon lemonade after a rehearsal. Now, the Dangs are back with a cool collaboration to support the band once again.

Called “Aloha for Da Band,” Eden In Love created a special UH band-inspired tote bag for sale on its website, with a portion of the proceeds benefiting the band. Within just several hours of its launch on August 26, the allotment of 500 bags sold out. Now, Eden In Love is accepting pre-orders for another run of tote bags, which will be available beginning October 1.

“I’m an alumni and have been a UH fan for as long as I can remember,” Dang said. “While the community has gotten on board with Coach Timmy and the #braddahhood, I still feel like the band doesn’t get enough recognition for all their hard work. I’d want them to know the community appreciates them for what they bring to all UH games and their music and dedication set the tone for our fans and UH athletics!”

Gwen Nakamura is the assistant director of the marching band and an icon at UH sporting events, donning her signature balloon hat at every game. Nakamura herself is featured on the tote bag, along with her dogs, balloon hat and even her car, which displays the license plate, “UHBAND.”

“This collaboration has meant so much to the band,” Nakamura said. “It’s been so exciting to grow this relationship and know that Eden In Love is a supporter and loves the band. For them to partner up with us and give back to the band and students has been fantastic.”

The bag also illustrates a major part of the program’s 99-year history. The year 1923 is displayed on the bag, which was when the program was established. It also pays tribute to Richard S. Lum, the late long-time leader of UH Bands, who became the director of bands in 1960 and served in that position for more than 25 years.