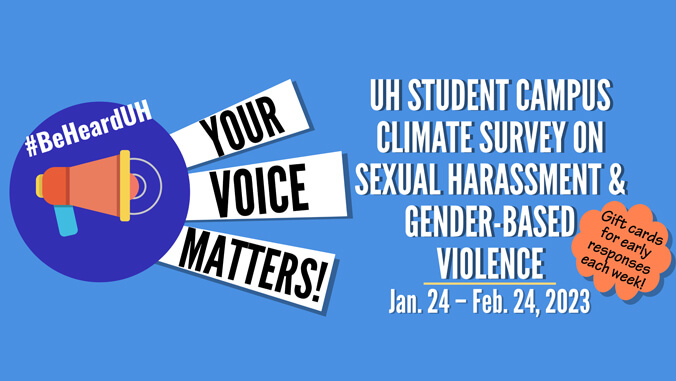 The University of Hawaiʻi continues to honor its commitment to foster supportive campuses where students feel safe from sexual harassment and gender-based violence. To help the university improve how and where resources are focused, UH is encouraging students to participate in an online survey by February 24, 2023.

“UH is committed to achieving a safe and supportive environment in which you can achieve academic success and personal growth,” UH President David Lassner said in a message to students at all 10 UH campuses. “We have made significant progress in addressing domestic and gender-based violence across our campuses over the past years. We are now requesting your input to help us do better.”

Those who participate are asked to encourage their fellow students to also take the survey, promote #BeHeardUH and urge everyone to speak up about sexual harassment and gender-based violence.

The survey, considered a national best practice, was first identified as a priority by UH in 2015 and was then mandated by the Hawaiʻi State legislature as part of Act 208 in 2016. It has been administered every other year since 2017 with the first survey results released in 2018.

Data from the survey will also be used to inform UH about marginalized groups on the different campuses and their varying levels of risk, and will address the needs of these students. It is also used to measure how each campus is doing in addressing problem areas revealed in previous surveys.

According to the last survey in 2021, students in the UH 10-campus system felt safer overall from sexual harassment and gender-based violence. About 17% of 40,122 adult students completed the 2021 survey, the highest response rate in UH’s three biennial campus climate surveys, even with the COVID-19 pandemic.

The survey is coordinated by the UH Office of Institutional Equity and conducted by OmniTrak Group, Inc with consultant researchers, Professors Sandra L. Martin and Bonnie S. Fisher, who consulted on the Association of American Universities 2015 Campus Climate Survey on Sexual Assault and Sexual Misconduct.

There are several options available to victims of gender-based harassment or violence depending on the type of assistance wanted.