The State of Hawaiʻi’s second highest ranking official credited her experience in student government at the University of Hawaiʻi at Mānoa with inspiring her for a career in public service.

Hawaiʻi Lt. Gov. Sylvia Luke served as president and as a senator of the Associated Students of UH (ASUH). Other ASUH senators at the time include Honolulu City Council Chair Tommy Waters, and the late U.S. Rep. K. Mark Takai, whom Luke beat in her bid for ASUH president. Takai was elected ASUH president after Luke completed her term. The trio later became colleagues again in the Hawaiʻi State House of Representatives.

“It’s not like the statewide elections here where you see all of the negatives. It was very cordial,” Luke said of her ASUH election against Takai. “Afterwards, because you could still remain a senator even if you ran for president, he ended up becoming one of my closest allies because he didn’t hold that against me and I didn’t hold that against him. Since then, until his passing, we have been close friends.”

One of the skills Luke mastered while at ASUH was advocating for important issues, which included the building of the Special Events Arena, now known as the Stan Sheriff Center.

“At ASUH, we lobbied for the 10,000-seat arena. At that time the university said they thought they could only fit a 5,000 seat arena, but Mark Takai did his own rendition and talked to people. He was convinced that you could fit a 10,000 seat arena,” Luke said. “So we came to the governor’s office, met with Gov. (John) Waiheʻe and made a presentation. Then after the meeting he said ‘ok.’ Every year he would label his year with something, so that year he labeled it as ‘Year of the Students,’ and part of it was his commitment to helping build a 10,000-seat stadium.”

Luke also recalled lobbying regarding a proposal to move the College of Tropical Agriculture and Human Resources to UH Hilo, in an effort to provide opportunities for programs at all campuses. She also worked with ASUH colleagues to create a teacher evaluation form, where students could see the evaluations and input before choosing their future courses. Luke compared it to her work in the state Legislature, but on a smaller scale. 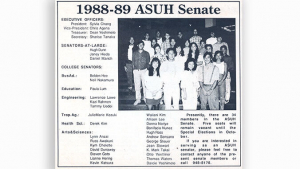 “It was really trying to come together and solve issues that surrounded student support and student activities, and make student life better,” Luke said. “…That kind of skill set and the ability to work with others really helped me in what I did as a legislator and then now what I do as a lieutenant governor.”

ASUH is also where Luke met her future husband, Michael Luke, who was also a senator. Luke eventually graduated from UH Mānoa with her bachelor’s degree in English, before earning her law degree from the University of San Francisco School of Law.

While a junior and senior at Roosevelt High School, Luke recalls conducting independent research at UH on genetics in entomology, with a focus on drosophila flies (common fruit flies). She said it was this early exposure to UH’s world-class research that led her to become a major proponent of Early College, a partnership between Hawaiʻi high schools and UH that allows high school students to take college classes and earn both high school and college credits.

“It is because I was able to do my independent studies at the university and helped me shape my interest in science, interest in STEM,” Luke said. “When we look now at how much we’ve gained through Early College and having that opportunity given to kids—looking back at my own experience of just voluntarily going to the university taking on programs—I think it’s such a great program that the university has partnered with the Department of Education to provide those opportunities.”

“There is nothing that compares to a University of Hawaiʻi education.” — Sylvia Luke

Luke is grateful for her experiences in ASUH, the Department of English and entomology, and her meetings with her college counselors who encouraged her to pursue a career in law.

“There is nothing that compares to a University of Hawaiʻi education,” Luke said. “You make so many contacts and you make so many friends, and you just find out so much. Even now when I go back to the university, I still reminisce about going to Campus Center and having lunch there. I was work-study so I remember working at Bachman Hall and I remember working at different areas around the campus. You’re learning about life experience, you’re learning about time management, and at the same time it’s part of a great student experience.”

While she reminisced about her time at UH, Luke is also excited about where the UH System stands today and looks forward to its evolution in the future.

“The university system provides such a great opportunity for kids, and from when I was a student, now it provides a complete model,” Luke said. “You have four-year colleges, not just at UH Mānoa, but at UH West Oʻahu and UH Hilo. Also, concentrated industry degrees and pathways through the community colleges. I think it provides so many more opportunities. And the fact that the university is cognizant in trying to get students to graduate on a timely basis.”

Luke was sworn in as the 15th lieutenant governor of the State of Hawaiʻi on December 5, 2022. Her priorities include expanding pre-K access to Hawaiʻi’s keiki and increasing access to broadband for Hawaiʻi residents.

“Pre-K cannot happen without the university’s support because no matter how many buildings we build out, if we don’t have enough preschool teachers to come out of the university system then it’s a failed network. We’ve been working closely with the College of Education and we identified the next steps we need to take,” Luke said. “For broadband, it’s really the idea that broadband is the pathway for not just educational equity, but it provides access to health care, in work opportunities, it opens up to all different kinds of things.”

Luke concluded, “The university is not just an educational institution but it provides economic opportunities and visioning for the state, and the university has a lot of resources that it can offer the state.”