University of Hawaiʻi at Mānoa Professor of Korean Ho-min Sohn was recently honored by the Republic of Korea for his research contributions and publications advancing the study of the Korean language.

Sohn received a cultural medal and citation, signed by President Lee Myung-bak, during an event celebrating the 565th Han’gul Proclamation Day attended by about 3,000 people in the Sejong Center Grand Theater in Seoul.

Han’gul is the Korean alphabet created by King Sejong the Great and promulgated to the public on October 9, 1446. 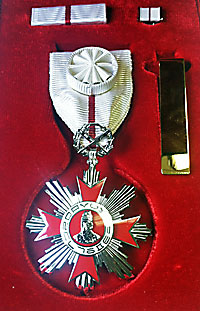 Sohn is a faculty member and former director of UH Mānoa’s Center for Korean Studies. A Department of East Asian Languages and Literatures faculty member since 1971, he is an authority on Korean linguistics specializing in phonology, morphology, syntax, semantics, pragmatics, sociolinguistics and Korean language education. He previously worked for the Republic of Korea Ministry of Education and taught at several universities in Korea.

A prolific writer, he is the author of Korean Language in Culture and Society (University of Hawaiʻi Press, 2005); The Korean Language (Cambridge University Press, 1999); Korean (Routledge, 1994); Linguistic Expeditions (Hanshin, 1986); and numerous articles. He directed a 10-year project, funded by the Korea Foundation, to develop 21 Korean-language textbooks and a dictionary of grammar and usage, all published by the University of Hawaiʻi Press.

Sohn was awarded a 2005 Regents’s Medal for Excellence in Research by the University of Hawaiʻi and a 2001 Tongsung Academic Prize by the Tongsung Foundation in Seoul for his scholarly achievements. He also received a presidential award from Republic of Korea President Young-Sam Kim in 1997 for promotion of the Korean language abroad.

Sohn holds a PhD in linguistics from UH Mānoa and master’s and bachelor’s degrees from Seoul National University.