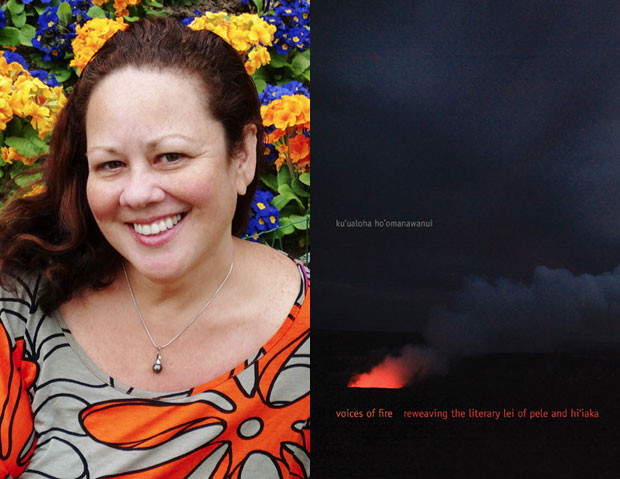 University of Hawaiʻi at Mānoa’s kuʻualoha hoʻomanawanui, associate professor and director of undergraduate studies in English, was awarded Honorable Mention for the Modern Language Association prize for Studies in Native American Literatures, Cultures and Languages for her first book, Voices of Fire: Reweaving the Literary Lei of Pele and Hiʻiaka (University of Minnesota Press). hoʻomanawanui is also a contributor to the top prize winner selected by the Modern Language Association, The Oxford Handbook of Indigenous Literature.

The citation reads: kuʻualoha hoʻomanawanui’s Voices of Fire: Reweaving the Literary Lei of Pele and Hiʻiaka represents the best of a growing body of scholarship in the field of Indigenous literary studies that engages Indigenous languages and draws on Indigenous intellectual traditions to present, contextualize, and analyze Indigenous literatures more effectively across genres and media. hoʻomanawanui’s Voices of Fire is a beautiful and in-depth cultural production, an act of critical sovereignty, and it is at the forefront of efforts to revitalize Hawaiian literary nationalism.

“It is an honor to have my work recognized not once, but twice by such a large and prestigious professional organization such as MLA,” said hoʻomanawanui. “It is not only a testament to my research and scholarship, but to the recognition of Hawaiian and Indigenous literatures as an important part of literary and cultural studies overall.”

Voices of Fire seeks to restore literature about volcano goddess Pele and her youngest sister Hiʻiaka, patron of hula, to its rightful place in Native culture and identity. Stories of Pele and Hiʻiaka are most familiar as a form of literary colonialism—first translated by missionary descendants and others, then co-opted by Hollywood and the tourism industry. Voices of Fire recovers the lost and often-suppressed political significance of this literature.

To be a part of the top prize and the only honorable mention prize is unprecedented. Further, hoʻomanawanui is the first Native Hawaiian scholar to receive this national prize. hoʻomanawanui was invited to a keynote presentation in Australia at an Indigenous Rhetorics symposium hosted by the University of Sydney as a result of her work in the Oxford Handbook on Indigenous Literature and Voices of Fire, which demonstrates the international appeal and importance of such work.

“UH’s commitment to being a Native Hawaiian place of learning includes Hawaiian knowledge, such as that contained in moʻolelo (literature) that I study, and Hawaiian scholarship, research and teaching, such as the work that I do, is being recognized locally, nationally and internationally,” said hoʻomanawanui. “I am proud to be a part of the development of Hawaiian and Indigenous literary production as a writer, editor, and researcher, and in helping train the next generation of writers, editors, researchers and scholars, passing down the knowledge from our kupuna (ancestors).”

hoʻomanawanui is a Kanaka Maoli (Native Hawaiian) nationalist, scholar, aloha ʻāina advocate, poet and visual artist born in Kailua, Koʻolaupoko, Oʻahu and raised in Kaipuhaʻa (Wailua Homesteads), Puna, Kauaʻi. She specializes in Hawaiian and Oceanic literatures, place-based writing and indigenous literacy. She is a former Ford Foundation pre-doctoral and doctoral fellow, and a Mellon Hawaiʻi post-doctoral fellow. Her artwork, poetry and short fiction in Hawaiian and English have been internationally published and translated. hoʻomanawanui is also a founding and chief editor of ʻŌiwi: A Native Hawaiian Journal, which features Native Hawaiian writers and artists.

College of Languages Linguistics and LiteratureEnglishfaculty recognitionHawaiianUH Manoa
Share This