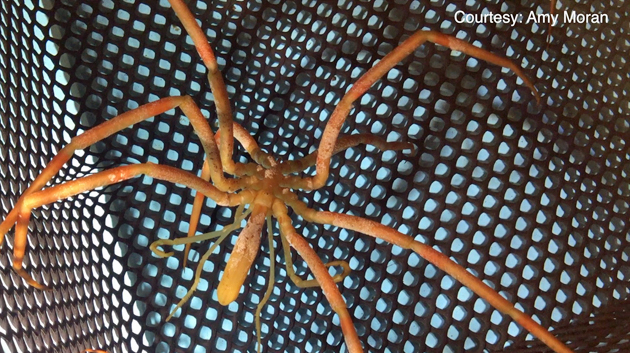 Sea spiders, a bizarre and ancient group of marine arthropods in the class Pycnogonida, breathe in a way not previously known to science, according to a study involving University of Hawaiʻi at Mānoa researcher Amy Moran and zoology PhD student Caitlin Shishido.

The study, published in the July 10 issue of Current Biology, was performed at McMurdo Station, Antarctica, while Moran and her team were there in the fall of 2016. Sea spiders in Antarctica can reach the size of dinner plates, part of a phenomenon known as “polar gigantism.” Most animals extract oxygen from the environment using specialized structures like gills and lungs, and distribute oxygen through their bodies using hearts and blood vessels. Sea spiders, distant marine relatives of land spiders, have no specialized structures to take up oxygen and their hearts are weak. Moran and her colleagues showed that sea spiders get oxygen through the surface of their legs and move it around their bodies while digesting their food with peristaltic contractions of the gut, which extends out to the end of all of the animal’s 8 to 12 legs.

“We are really excited about these results because they show that sea spiders solve one of life’s biggest challenges—getting oxygen into the body and taking it where it needs to go—in a way that is new to science,” said Moran. “The next thing we would love to know is if this is unique to sea spiders, or if other animals also move oxygen with their guts and we just never knew about it.”

Jon Harrison, a professor of biology at Arizona State University not involved in the project, says “This study beautifully demonstrates that sea spiders use their legs like gills and their guts like hearts, illustrating the important role of basic research in revealing very fundamental attributes of animal function.”

This work was funded by grants from the Division of Polar Programs at the National Science Foundation.