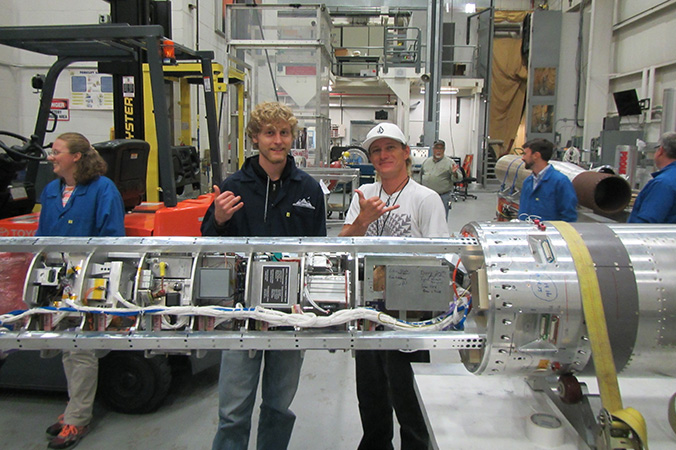 Editor’s Note (August 14): The Project Imua payload was successfully launched Sunday, August 13 at 5:30 a.m. EDT. According to Honolulu Community College mentor William Smith, the sounding rocket went about 96 miles high and returned down into the Atlantic about 80 miles from shore. It was fished out of the sea (recovered) by a contracted local fishing boat. For images of Project Imua 2017, see the Flickr album.

University of Hawaiʻi community college students are getting ready to launch their third payload from a NASA facility. The launch from Wallops Flight Facility in Virginia is scheduled for a window between 5:30 and 9:30 a.m. EDT on Saturday, August 12. (See editor’s note above.)

Smartphone users can download the What’s Up at Wallops app, which contains information on the launch as well as a compass showing the precise direction for launch viewing.

Project Imua is a joint faculty-student enterprise of four UH community college campuses (Honolulu, Kapiʻolani, Kauaʻi and Windward). Its primary mission is to engage undergraduate students in project based STEM research with real-world development of small payloads for space flight. A NASA grant awarded to the Hawaiʻi Space Grant Consortium has helped to fund the project.

Honolulu CC Project Imua Mentor Will Smith and students Cale Mechler and Nick Herrmann are at Wallops in final preparations for Saturday’s launch. Another mentor and other UH community college students traveled to Wallops this past June to conduct preliminary tests on the payload.

For more on the August 12 launch and the participating universities and colleges, see the NASA website.

For more images of Project Imua 2017, see the Flickr album.