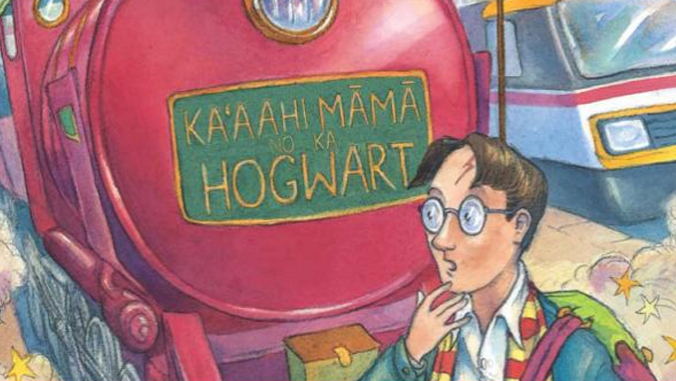 NeSmith, who teaches Tahitian language courses in UH Mānoa’s Department of Indo-Pacific Languages and Literatures, said it took about six weeks to translate the book. He finished the project on a train from Paris to Barcelona. “It really felt like I was in the story with Harry Potter at the end of the first book,” he said.

NeSmith’s interest in translating ʻōlelo Hawaiʻi is personal. For him, it’s an exercise that engages the integration, comparison and contrasting of cultures and languages. “As I translate, I often hear the voice of my grandmother, whom I lived with growing up and who taught me Hawaiian,” he said. “But I also hear the voices of other Hawaiian-speaking relatives and acquaintances; all of these voices help the way I translate.”

As I translate, I often hear the voice of my grandmother, whom I lived with growing up and who taught me Hawaiian.
—Richard Keao NeSmith

The Kauaʻi native’s work translating books into ʻōlelo Hawaiʻi dates back to when he worked in UH Hilo’s Hale Kuamoʻo, an office that produced books for Hawaiian immersion schools. “There were Hawaiian classics published in the 1800s about moments in the life of Kamehameha and other cultural heroes,” said NeSmith. “Ironically, some books were first printed in English, and I translated them into Hawaiian.”

An email from Evertype Publishing in 2012 took his career and academic path in a new direction. “Evertype asked if I would translate the first Alice into Hawaiian as part of a larger project to commemorate the 150th anniversary of the first release of that book. I was then asked to deliver a keynote at the Alice 150 conference in New York in 2015 about the experience of translating that book into Hawaiian.” The rest, they say, is history.

NeSmith has also translated the ʻōlelo Hawaiʻi version of The Little Prince by French writer Antoine de Saint-Exupéry. Other translated books include J.R.R. Tolkien’s The Hobbit and Lewis Carroll’s Alice’s Adventures in Wonderland and Through the Looking Glass and What Alice Found There and L. Frank Baum’s The Wonderful Wizard of Oz.

Translating Lewis Carroll was intriguing, according to NeSmith. “He was at the forefront of the literary nonsense genre in the mid-1800s and, at the same time here in Hawaiʻi, there was an explosion of production of translations from western literature,” NeSmith said. He plans to translate the rest of the Harry Potter and Lord of the Rings series.

Harry Potter a me Ka Pōhaku Akeakamai: Harry Potter and the Philosopher’s Stone in Hawaiian (Hawaiian Edition) is available at Amazon and in local bookstores that carry Hawaiian books.