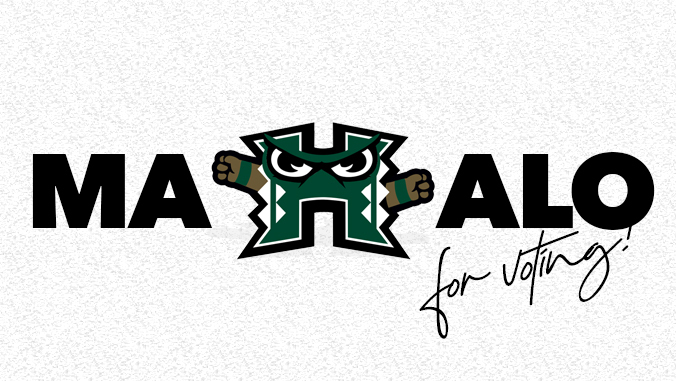 The “May Madness” magical run has come to an end in the 2020 Tokyodachi Mascot Mania tournament.

University of Hawaiʻi at Mānoa’s character fell in the quarterfinals to Fresno State in the most tightly contested battle and the match with the largest vote total in the entire competition, 19,630 to 19,397.

Despite the Elite 8 loss, thanks to YOUR support, UH Mānoa’s character took down major powerhouses such as Pac-12 members Washington (round 5) and UCLA (round 3), ACC members Pittsburgh (round 4) and Syracuse (round 2), and Radford University (round 1). UH Mānoa’s character had the fifth highest vote total through the quarterfinals with 52,192. This was UH Mānoa’s first appearance in the Tokyodachi Mascot Mania tournament, which began on April 20 with 256 schools.

The light-hearted tournament was an opportunity to showcase the UH Mānoa character, designed by Zephyr, and remain engaged on social media with fellow ʻBows. The winning campus will earn its own custom Tokyodachi merchandise line.

“We were very pleased with the participation from our community through the Tokyodachi tournament,” UH Mānoa Athletics Director David Matlin said. “Mahalo to all of our fans who carried us to the Elite 8 in our first ever showing. The tournament gave our university national exposure and a nice diversion from the current issues our state is facing today. We look forward to next year and going even further. Go ʻBows!”

“A huge shout out to the fans who supported us throughout the tournament! Without you we couldn’t have made it this far,” UH Licensing Administrator Debbie Kutara said. “Tokyodachi merchandise is available on its website and will be in the UH Bookstore.”