As mass public demonstrations inspired by the Black Lives Matter movement continue to pick up momentum across the globe, an initiative to strengthen calls to stand against racism and discrimination builds on higher education campuses across the U.S.

The University of Hawaiʻi at Mānoa is one of 10 trail-blazing campuses across Hawaiʻi and the U.S. selected to implement ambitious, visionary action plans that tackle historical and contemporary effects of racism. In July, the Association of American Colleges and Universities (AAC&U) compiled a collaborative report on the advancement of Truth, Racial Healing and Transformation (TRHT) at each of the campuses, including higher education institutions Brown and Duke University. The 52-page report, We Hold These Truths features a collection of essays submitted by each TRHT. 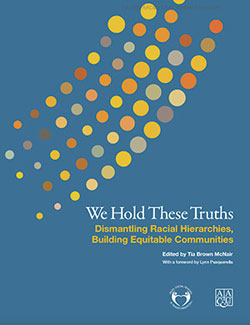 The UH Mānoa TRHT contribution, Our Hawaiʻi-Grown Truth, Racial Healing & Transformation: Recommitting to Mother Earth highlights the need to incorporate Native Hawaiian values such as kuleana (responsibility) and caring for ʻāina (land, earth) within our relationships, which can help shape a brighter future for keiki.

“Ending racism is definitely a marathon, not a sprint. And the work to share and learn truths, create spaces of healing in which we can all recognize our common humanity and our interconnectedness, and transform spaces using our radical imagination as well as the intelligence of our ancestors is not easy,” said Kaiwipuni Lipe, TRHT lead at UH Mānoa. “That’s the world I want for my children and grandchildren, so I’m committed to doing what I can.”

The TRHT team at UH Mānoa has worked to shape its vision and advance action plans since 2018. AAC&U hopes to expand the number of TRHT Campus Centers to at least 150 colleges and universities across the U.S. The second cohort of TRHT campus centers were just selected which adds another 13 campuses to the growing advancement.