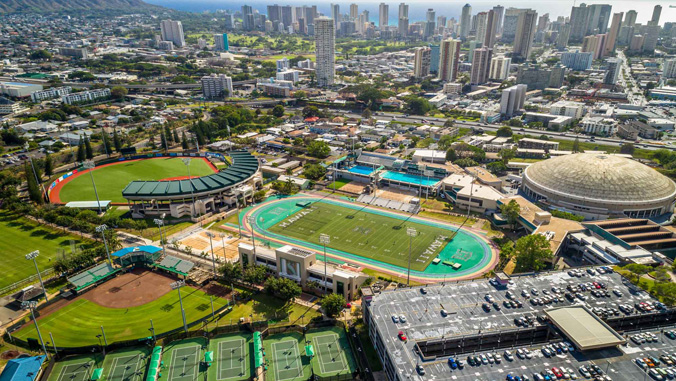 The project to retrofit the Clarence T.C. Ching Athletics Complex is proceeding as the University of Hawaiʻi at Mānoa campus is preparing to host Rainbow Warrior football games and up to 10,000 fans in time for the 2021 home season opener on September 4. UH is working under a tight deadline after being notified in December 2020 that Aloha Stadium, the Rainbow Warriors’ home field since 1975, would not be available to host fans for the next three football seasons. The Ching Athletics Complex currently has about 3,500 seats.

The fast-tracked project is expected to cost about $8.3 million. The initial 1-year estimate was lower because it was based on renting grandstand seats for $1.6m/year. After getting a price to purchase the bleachers it became clear that would be financially advantageous over the minimum 3-year period planned for football. The project will proceed simultaneously with a previously scheduled and funded $1.8 million project to replace the Ching Field turf and install a new scoreboard.

“The Athletics Department and the Office of Project Delivery are doing an amazing job in pulling together this complex project in such a short period of time,” said UH President David Lassner. “Although this was completely unexpected even 6 months ago, our team has risen to the challenge and we are seeing lots of excitement about playing Rainbow Warrior football on campus.”

Due to the timing of the Aloha Stadium announcement, it was too late for UH to look for new state funding for the project. The university is using existing capital improvement funding to backstop the private fundraising campaign underway to support the effort.

The retrofit project includes adding grandstands to expand seating, creating hospitality suites to generate revenue, adding six new press boxes, electrical and telecommunications upgrades to support the press and instant replay, field goal netting, scoreboard and game clocks, new concession capacity, and temporary bathroom facilities. Most of the needed materials, including the grandstands and prefabricated press boxes, have been ordered and are expected to be delivered for installation over the summer.

Until a more comprehensive traffic study can be conducted, UH will not hold athletics events at the Simplifi Arena at the Stan Sheriff Center on football game days, which will be played only on Saturdays. UH has existing traffic control and on-site parking plans that can accommodate more than 10,000 fans at events on the campus and up to 20,000 people for spring commencement.