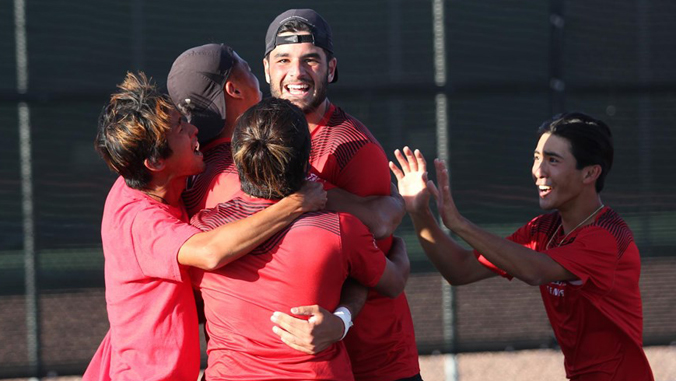 The University of Hawaiʻi at Hilo Vulcan tennis team, making its third consecutive trip to the Pacific West Conference championship, stunned No. 1 seed Azusa Pacific University (APU) to claim the program’s first-ever league title. The team took the title, 4-3, on April 24 at the Surprise Tennis and Racquet Center in Arizona.

The team won UH Hilo’s first PacWest banner in any sport since 2014. The Vulcans celebrated with the PacWest trophy and an automatic bid to the NCAA West Regional tournament in two weeks, also in Arizona. The Vulcans are now 8-2 on the season and the Cougars are 17-4. It was APU’s first loss to a Division II school this season.

UH Hilo won in the most improbable of ways—upsetting the top two ranked players in the conference after losing the doubles point. The clinching point came in the last match of the day, with Luca Checchia winning the final two sets by 7-5 after dropping the first set in the tiebreaker.

“We have been limping along the last few weeks with various injuries, but really stepped up today and throughout this tournament,” said Vulcan Head Coach Kallen Mizuguchi. “It was a really gutsy performance, all across the line-up. I couldn’t be prouder of our guys.”

The Vulcans will find out the rest of the field and the seeding at the NCAA selection show on May 4. It is expected the field will include the final four teams from the PacWest tournament—the Vulcans, APU, Hawaiʻi Pacific University and Concordia University.

For more on the championship win, go to the UH Hilo athletics website.