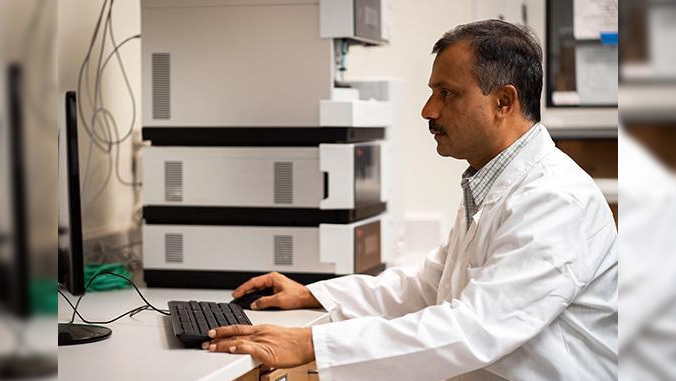 Compared to the fattening up power of soybeans and corn, high-fiber animal feeds are often considered to be inefficient for optimal growth and production. But livestock producers may want to reconsider that stance. That’s according to Associate Professor Rajesh Jha of the University of Hawaiʻi at Mānoa College of Tropical Agriculture and Human Resources Department of Human Nutrition, Food and Animal Sciences.

“Our lab has studied many alternative feed components for developing cost-effective and sustainable animal production systems and, in the process, found many functional benefits of dietary fiber not previously appreciated,” Jha noted.

Although fibrous feedstuffs typically have fewer calories and relatively lower nutritional values, the higher level of dietary fiber works to improve the animal’s gut health by modulating beneficial microorganisms in the large intestine, the same way as in humans. This benefits the immune function, as well as overall health and performance.

“Alternative feedstuffs are a reasonably cheaper animal feed, and can be sourced locally,” Jha added. “Interestingly, dietary fibers and their components have a prebiotic function and are considered alternatives to antibiotics in animal feeding programs. This is of particular importance when the animal industry is under pressure to produce food animals without antibiotics in their diets.”

The review paper appears in the Journal of Animal Science and Biotechnology.