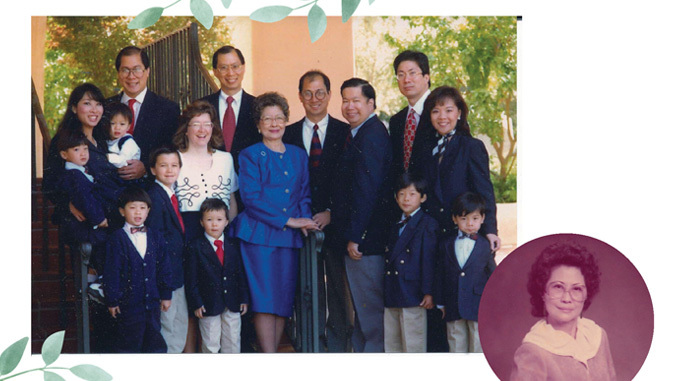 A pioneering Chinese female doctor who overcame humble beginnings, gender prejudice, cultural limitations and racial discrimination has been honored with a scholarship in her name. The late Florence J. Chinn was taught by her parents to value three things: education, family and community service. Accordingly, she excelled in all of her academic endeavors, raised five sons as a single mother and found so much joy in giving back to the community, that her family created a scholarship in memoriam.

The gift was presented to the University of Hawaiʻi at Mānoa John A. Burns School of Medicine (JABSOM) on March 29, 2021, which would have been Chinn’s 94th birthday.

“This scholarship in her name is a scholarship of hope. It encourages talented students to believe in themselves in the difficult journey to be a doctor,” William Loui, an oncologist and assistant clinical professor at JABSOM, said of his mother’s scholarship. “Happy birthday Popo! This is our gift in remembrance for you.”

At an early age, Chinn worked as the cashier at her family grocery store in Sacramento because she spoke English and five Chinese dialects, and because she had a knack for math. Despite earning top grades throughout her life, she was turned down by a distinguished California medical school that said they had already filled their quota of just one female position over the next two years. The dean of that school told Chinn that she “didn’t have a Chinaman’s chance in hell” of ever becoming a doctor.

Undeterred, she was admitted to the Woman’s Medical College of Pennsylvania, one of only two medical schools in the nation dedicated to training female physicians at that time. There, she earned the Professor of Medicine Award as the outstanding medical student. She was the only female out of 40 doctors during her internship year at Sacramento County Hospital and was selected for an elite internal medicine program at the world renowned University of Pennsylvania Hospital.

“She was told she shouldn’t, couldn’t and wouldn’t be a doctor but she persisted and became a doctor,” Loui said.

While working on her master’s degree at University of Pennsylvania, she married another doctor. They had five children within eight years. Chinn moved to Honolulu in 1959 and became one of the first Chinese, female board-certified internists in the state.

As his mother raised him and his four brothers on her own, Loui said she recognized that single parents have significant barriers and obstacles to overcome. The Dr. Florence J. Chinn Memorial Endowed Scholarship will provide scholarship support for a full-time JABSOM student, who exhibits academic merit, a financial need and with a preference for a student who is a single parent or is the child of a single parent.

Despite working full time, Chinn volunteered for the Punahou School Carnival, the Hawaii Medical Society Domestic Violence Committee and the St. Francis Medical Center. After the removal of a brain tumor, she worked for the Hawaiʻi chapter of the American Cancer Society as the screening education coordinator. She also worked as a medical consultant for the State of Hawaiʻi’s Health and Human Services Department, where she won a national award for her program to fight fraud and abuse that saved Hawaiʻi $2 million over six years.

Speaking to Loui and his siblings, JABSOM Dean Jerris Hedges said, “Your mom has made quite a presence here in Hawaiʻi in terms of not only practicing but leading a lot of efforts to address cancer, prevent and recognize cancer early. We’re quite pleased that we get to honor her not only for her accomplishments but for her strength and her championing of what women in medicine can do.”

Learn more about the scholarship and how to support it at UH Foundation.

The Dr. Florence J. Chinn Memorial Endowed Scholarship is an example of UH Mānoa’s goal of Enhancing Student Success (PDF), one of four goals identified in the 2015–25 Strategic Plan (PDF), updated in December 2020.