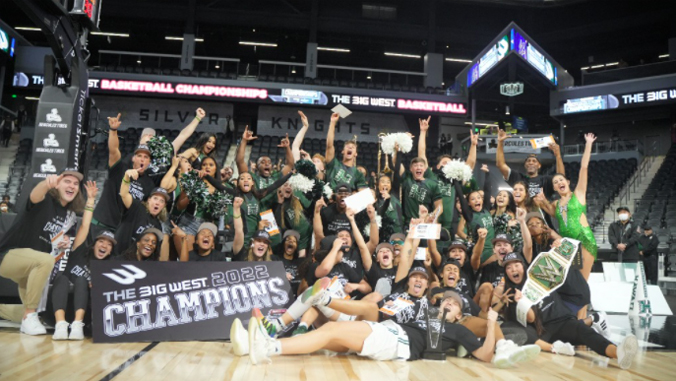 Update March 13, 2022: The UH Rainbow Wahine basketball team received the No. 15 seed in the Wichita Regional and is headed to Waco, Texas to play No 2 seed Baylor in the first round of the NCAA Tournament. The game is on Friday, March 18, 10 a.m. HST. Baylor enters the tournament as the Big 12 runner up with a 27-6 record.

After winning the Big West Conference regular season, the University of Hawaiʻi Rainbow Wahine basketball team proved why they earned the No. 1 spot, taking down three teams in the Big West tournament to clinch the conference’s automatic bid into the NCAA Tournament. UH (20-9) capped off the week by defeating No. 2 seed UC Irvine (21-11) 59-48 in the championship game on March 12 at Dollar Loan Center in Henderson, Nevada.

UH went on an early 4-3 lead in the first quarter on a basket by Phillips. The Anteaters then went on a five-point run taking the 8-3 lead midway through the quarter, before the Rainbow Wahine managed to close the gap at 10-9 at the end of the quarter. UC Irvine jumped out to an early 10-4 run in the second quarter extending its lead at 20-13 with 4:13 remaining in the half. The Rainbow Wahine stayed within striking distance trailing by five at halftime, 26-21.

The third quarter was the turning point in the game. UH jumped out to a 17-3 run in the quarter as UC Irvine went on a six-minute scoreless streak, leading 38-29 with 2:31 left in the quarter. The Anteaters countered with a pair of field goals, but the Rainbow Wahine maintained a five-point lead at 41-36 at the end of the third quarter. In the fourth, UH built up its lead to as many as 13 points on three free throws by Atwell with 6:53 remaining in the game. UC Irvine closed the gap to six points at 49-43, but the Rainbow Wahine held on for the 11-point win.

UH advanced into the championship game after defeating No. 4 seed UC Riverside 69-55 in the semifinals, and sneaking past No. 9 seed CSU Bakersfield 48-47 in the quarterfinals. UH earned a bye into the quarterfinals by virtue of its No. 1 seed.

UH finds out where it will be headed for the first round of the NCAA Tournament at 2 p.m. HST on March 13. This year’s NCAA Tournament will be the first to expand to 68 teams. The First Four games will be played on March 16 and 17. First and second round games will be March 18-21. Regionals take place March 25-28, and the Final Four in Minneapolis, Minnesota will be April 1 and 3.

UH finished Big West regular season play in first place with a 13-3 conference record. Atwell was awarded Big West Player of the Year and named to the All-Big West First Team. Head Coach Laura Beeman was named Big West Coach of the Year, and Phillips was an honorable mention.