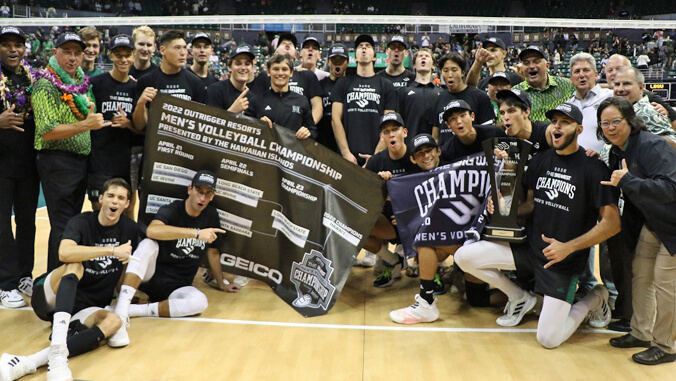 The University of Hawaiʻi at Mānoa men’s volleyball team captured its second Big West Championship tournament title with a grueling straight-set sweep over rival Long Beach State on Saturday, April 23, in front of a raucous crowd of 6,636 at SimpliFi Arena at Stan Sheriff Center. Set scores were 27-25, 28-26, 25-23.

In a rematch of the 2019 final, the second-seeded Rainbow Warriors (24-5) claimed the title and the league’s automatic berth into the NCAA Championship where UH will face either Princeton or North Greenville in an opening round match, Tuesday, May 3, at 4:30 p.m. (HST) at UCLA’s Pauley Pavilion in Los Angeles.

Tournament Most Valuable Player Jakob Thelle directed UH to a .368 hitting percentage for the match, including .452 in the third set. The Tonsberg, Norway native dished out 43 assists and added 11 digs for his second double-double of the season. Dimitrios Mouchlias and Spyros Chakas each tallied 16 kills for the Warriors, which also received a boost from Chaz Galloway (7 kills, 5 digs) and Guilherme Voss (7 kills, 5 blocks).

The win capped a perfect home season (18-0) for UH, and avenged two losses to the Beach earlier this month in Long Beach.

For more on the game visit HawaiiAthletics.com.