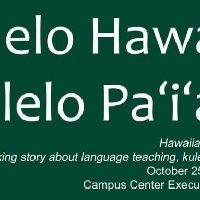 This presentation reflects on my personal experiences in the DOE’s attempt to extinguish the use of Hawaiian Creole or “Pidgin” in public schools while growing up in the 1980s and how that attempt has led me to become a part of the Hawaiian language revitalization movement. It will also cover the evolution of Pidgin and its substratal relationship to the Hawaiian language as well as how it’s incorporated into Hawaiian language instruction in my courses to assist and support Hawaiian language acquisition regarding syntax, intonation, and identity.

Bio: Dr. Cabral was born and raised in ʻŌʻōkala, Hawaiʻi, which is a small sugar plantation town on the border of Hilo and Hāmākua. The Hawaiian Creole or “Pidgin” spoken in that plantation community is his first language. The sugar mill for the Hāmākua Sugar Company was located in ʻŌʻōkala when the sugar plantation was still in business and he grew up in one of the many plantation camps, namely Kukui Village, surrounding the mill among different ethnic groups ranging from Hawaiians to the immigrant groups who moved to Hawaiʻi to work for the plantation. He attended Laupāhoehoe High and Elementary School from K-12. After one year at UH-Mānoa, he moved back home to attend UH-Hilo where he got a B.A. in Hawaiian Studies and Natural Sciences, an M.A. in Hawaiian Language and Literature, and a Ph.D. in Hawaiian and Indigenous Language and Culture Revitalization. This is his twentythird year of teaching Hawaiian Language for Ka Haka ʻUla O Keʻelikōlani, the College of Hawaiian Language at UH-Hilo. His research interests include Hawaiian syntax and grammar as well as second language acquisition. He has three pitbulls named Jiro San, Halle Girl, and Masanori.

Bio: Dr. K. Laiana Wong’s focus area of teaching is Hawaiian worldview. He is interested in investigating Hawaiian as it existed during a time when there were more speakers. In order to revitalize the language, it is necessary to know its past in order to maintain a link to its present. As we constantly deal with new phenomena that did not exist in the past, it is necessary, as we use the language in new contexts, to invent news ways of speaking to accommodate those changing contexts. We must always endeavor to maintain that link as it allows us to make legitimate our claim that we are indeed revitalizing the language of our kūpuna. As part of this effort to revitalize our language, it is necessary to increase its cachet in the community. One of the primary ways he does this is by writing a Hawaiian language newspaper column each week in the Honolulu StarAdvertiser and refusing numerous requests to provide written translations in English. He is also involved in the preparation of teachers for the Hawaiian Language Immersion Program.

Bio: Dr. Kekeha Solis is an Associate Professor of Hawaiian at Kawaihuelani Center for Hawaiian Language. His dedication and aloha for his students is very apparent in his teaching style. His research covers language and culture revitalization and worldview utilizing traditional and contemporary sayings.  He teaches an array of introductory as well as upper division Hawaiian Language courses.  Kekeha is famous among his students for his ‘ōlelo noʻeau course in which students learn the wit and intelligence kūpuna had when using Hawaiian proverbs. His other popular coursework includes facilitating student voice-over projects using popular films to engage Hawaiian language learners.

PART 3: Presentations by teachers and scholars who make connections between Pidgin and Hawaiian

Bio: Ali is an instructor of Hawaiian language at Kawaihuelani Center for Hawaiian Language, University of Hawaiʻi at Mānoa. She received her BA in History and her MA in Hawaiian from UH Mānoa. Pidgin has been very helpful to her in the classroom, where she teaches beginning Hawaiian levels 101, 102 and 201.

This portion of the summit intends to critically examine the attitudes and ideologies that surround both Hawaiian language and Pidgin English here in Hawaiʻi. The motivations of this discussion seek to uncover discursive processes that value one language over the other. Through an ethnomusicological framework, I analyze the compositions of several mele kamaʻāina (local songs) written in ʻōlelo Hawaiʻi, ʻōlelo paʻi ʻai, or a combination of both. Accordingly, I posit that the value perceived in, assigned to, and maintained by Hawaiian language and Pidgin English is largely impacted by the way both languages are represented in these mele. These assertions intend to pinpoint how such surrounding attitudes and ideologies began, and more importantly, how they persist.

Bio: Noah Haʻalilio Solomon is from Honolulu, Oʻahu, and is an instructor at Kawaihuelani Center for Hawaiian Language. He received his MA at the University of Hawaiʻi at Mānoa, where he is currently pursuing his PhD. He is currently conducting sociolinguistic research about Hawaiian language ideologies, but other academic interests include language revitalization, ethnomusicology, mele Hawaiʻi, and the recovery of Hawaiian language primary sources. In this presentation, Haʻalilio will address his personal experiences about Hawaiian and Pidgin English within the ongoing movement to revitalize Hawaiian language, and the continual push to counteract language shift in Hawaiʻi

In this talk, I look at Pidgin use through a rhetorical lens—an analysis that accounts for the social, ideological, cultural contexts of language use—to illustrate the implications of understanding Pidgin as a Kanaka Maoli linguistic resource versus as a “local” language. I discuss Kanaka Maoli poet Noelle Kahanu’s poem “The Question,” written in both Pidgin and English, as an example of what Scott Richard Lyons has termed rhetorical sovereignty. I posit that by writing in both languages, Kahanu constructs a complex identity that is a product of multiple affiliations and provides a narrative grounded in Kanaka Maoli experiences and epistemology. This talk illustrates how understanding Pidgin as Kanaka Maoli linguistic resource provides access to rhetorical implications of Pidgin language use that further our understandings of the connections between Pidgin and Kanaka Maoli culture.

Bio: Dr. Georganne Nordstrom is an Associate Professor of Composition and Rhetoric and Director of the University of Hawaiʻi at Mānoa’s (UHM) Writing Center. She researches critical and place-based pedagogy, and examinations of Indigenous and minority rhetorics, with a specific focus on Pidgin. She is a co-editor of Huihui: Aesthetics and Rhetorics of the Pacific (UH Press, 2015). Dr. Nordstrom is also the recipient of UHM’s 2016 Chancellor’s Citation for Meritorious Teaching and the 2012 Richard Braddock Award for the article “Ma ka Hana ka ‘Ike (In the Work is the Knowledge): Kaona as Rhetorical Action.”