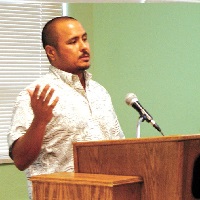 This presentation reflects on my personal experiences in the DOE’s attempt to extinguish the use of Hawaiian Creole or “Pidgin” in public schools while growing up in the 1980s and how that attempt has led me to become a part of the Hawaiian language revitalization movement. It will also cover the evolution of Pidgin and its substratal relationship to the Hawaiian language as well as how it’s incorporated into Hawaiian language instruction in my courses to assist and support Hawaiian language acquisition regarding syntax, intonation, and identity.

Bio: Dr. Cabral was born and raised in ʻŌʻōkala, Hawaiʻi, which is a small sugar plantation town on the border of Hilo and Hāmākua. The Hawaiian Creole or “Pidgin” spoken in that plantation community is his first language. The sugar mill for the Hāmākua Sugar Company was located in ʻŌʻōkala when the sugar plantation was still in business and he grew up in one of the many plantation camps, namely Kukui Village, surrounding the mill among different ethnic groups ranging from Hawaiians to the immigrant groups who moved to Hawaiʻi to work for the plantation. He attended Laupāhoehoe High and Elementary School from K-12. After one year at UH-Mānoa, he moved back home to attend UH-Hilo where he got a B.A. in Hawaiian Studies and Natural Sciences, an M.A. in Hawaiian Language and Literature, and a Ph.D. in Hawaiian and Indigenous Language and Culture Revitalization. This is his twentythird year of teaching Hawaiian Language for Ka Haka ʻUla O Keʻelikōlani, the College of Hawaiian Language at UH-Hilo. His research interests include Hawaiian syntax and grammar as well as second language acquisition. He has three pitbulls named Jiro San, Halle Girl, and Masanori.