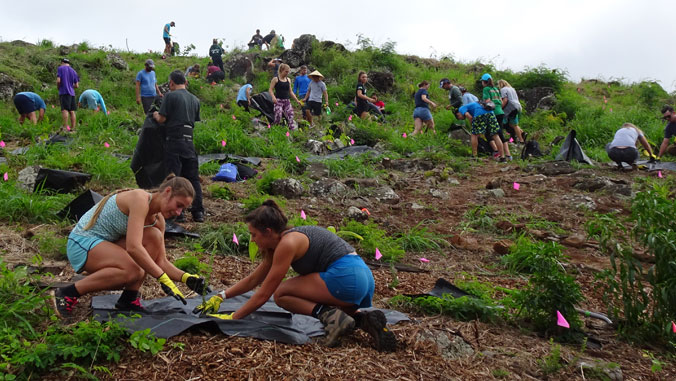 The Carbon Neutrality Challenge, a joint project by the University of Hawaiʻi at Mānoa and numerous organizations, aims to test the feasibility of restoring local ecosystems to offset all of the state’s carbon emissions.

Last October, the project held its first proof-of-concept event and planted a record-setting 1,000 trees in two hours. This year, the group plans to plant 11,000 trees on Saturday, October 26, to prove that it is possible to plant on the massive scale needed to position Hawaiʻi as the first place in the world to fully offset its carbon emissions via ecosystem restoration.

“Hawaiʻi could show the world how it is done. We could be the first. We have the space. We have the will. We just need the money,” says Camilo Mora, associate professor of geography in the College of Social Sciences at UH Mānoa and lead investigator in the project.

The two biggest threats to newly planted saplings are weeds and a lack of water. Last year, Mora’s team placed weed-blocking mats around each of the trees planted. This resulted in a 50 percent survival rate for the saplings.

This year, to address the water issue, a team led by Mora developed a low-cost, patent-pending watering system. The system captures rain water through a catchment system and stores it in a tank. Water flows out of the tank into the ground at a rate of one liter a day. The system collects enough water during the rainy season to last through the dry season, thus ensuring constant water to the trees, reducing mortality, and the need for constant maintenance. Each system costs only $4 to build, and is reusable for up to 10 years, bringing the cost of irrigation to just about $0.40 per tree. With the addition of the watering system, survival rates for the saplings are expected to rise to approximately 90 percent.

To ensure that each sapling planted on October 26, will have a watering system in place and the added protection of weed-control mats to increase its survival rate, the team is launching a crowdfunding campaign with a goal of $55,000.

“Each donation received brings us a step closer to our goal of making Hawaiʻi the nation’s first carbon-neutral state,” said Asryelle Mora Rollo one of the creators of the project.

“In a not too distant future, our children could tell their children that we fixed climate change and left a forest behind. Alternatively, they could say we saw our planet being destroyed, and we did nothing or not enough,” said Mora. “The opportunity is there now for us to decide which future we want. The time to fix climate change is now, and planting trees is a given.”