University of Hawaiʻi at Hilo researchers located an endangered native seabird called the ʻuaʻu and a nesting site on Maunakea in May 2021. Active ʻuaʻu (also known as the Hawaiian petrel or Pterodroma sandwichensis) have not been recorded on the mauna since 1954.

“When we saw them for the first time it was almost a moment of disbelief,” said conservationist Bret Nainoa Mossman, a UH Hilo alumnus who along with UH Hilo researcher Patrick Hart spent years enduring frigid conditions after sundown on Maunakea searching for the seabirds. “We had been looking for them for so long that they were kind of like this ghost that we were just chasing on the mauna. To actually see them, just like really connected the dots and really cemented how important what we were doing really is because no one else was looking for these birds for quite a long time.” 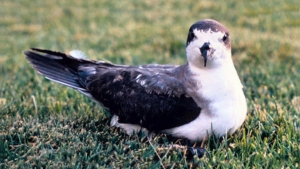 The UH Hilo Office of Maunakea Management (presently, the Center for Maunakea Stewardship) has funded research of native Hawaiian birds and Hawaiian hoary bats, at high elevations since 2017 to determine if UH managed lands provides habitat for these native animals and to fulfill management actions identified in the Maunakea Comprehensive Management Plan. UH Hilo researchers spotted the ʻuaʻu on a Department of Hawaiian Homelands (DHHL) protected parcel that borders UH managed lands on Maunakea.

Using sound recorders, infrared and thermal imagery, researchers scanned remote locations for ʻuaʻu and first detected flight activity in April 2021 on DHHL-managed lands on Maunakea. DHHL staff and researchers then discovered a nest burrow and worked to set up traps to deter prime predators such as cats and mongoose who are known to feast on ʻuaʻu chicks and adults. The undisclosed location of the seabird’s nesting site falls within the department’s zoned conservation lands planned for māmane forest restoration.

The Department of Land and Natural Resources has provided predator traps and a camera to capture ʻuaʻu activity.

The ʻuaʻu forage at sea and fly inland after sunset to build underground nests in higher elevation areas throughout the Hawaiian Islands, including Kauaʻi, Haleakalā on Maui, Maunaloa on Hawaiʻi Island and Lānaʻihale on Lānaʻi. They are currently listed as an endangered species under state and federal policies. 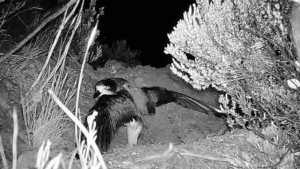 The endangered seabird’s Hawaiian name depicts its distinctive moaning. The ʻuaʻu has been detected acoustically by the UH Hilo Listening Observatory for Hawaiian Ecosystems Bioacoustics Lab since 2018 at many locations near Maunakea’s Puʻukanakaleonui. Rediscovering ʻuaʻu on Maunakea indicates the species likely continues to use the mountain as a nesting site.

“If we can identify where the populations are, that’s the first step in being able to preserve them,” said Hart. “The best way to do that is to remove the threats to them by putting up a predator proof fence that protects them when they nest.”

During their research surveys, Hart and his team have also detected calls of the ʻAkēʻakē (​Band-rumped storm petrel), another endangered native seabird. UH Hilo researchers will continue to search for ʻuaʻu and other native birds on Maunakea through the end of the year.