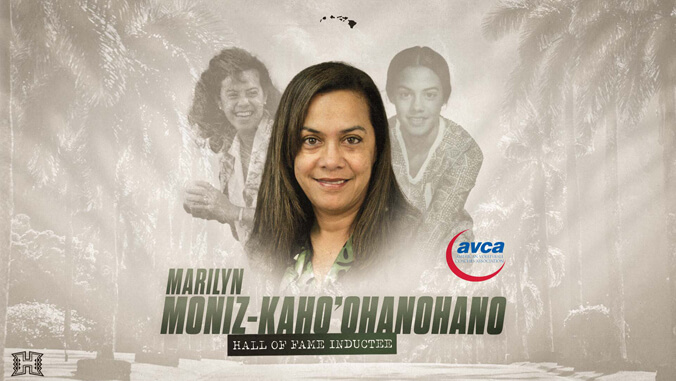 University of Hawaiʻi’s Marilyn Moniz-Kahoʻohanohano has been inducted into the American Volleyball Coaches Association’s (AVCA) Hall of Fame. The class of 2021 inductees will be formally recognized during the Jostens Coaches Honors Luncheon on December 16.

Moniz-Kahoʻohanohano was selected in the administrator category. The former Rainbow Wahine volleyball player served as UH’s senior woman administrator and associate athletics director for nearly three decades and was an instrumental figure in collegiate indoor and beach volleyball on both a local and national scale.

When she took the court in 1972 as part of the first Rainbow Wahine women’s volleyball team, Moniz-Kahoʻohanohano began what has been a decade’s-long love affair with both the sport and her school. After her playing days were over she returned to UH in 1989, performing groundbreaking work until her retirement in 2017.

She helped elevate Hawaiʻi volleyball on the national stage, not only in terms of competitiveness and attendance, but also facilities and media coverage. The Rainbow Wahine program consistently ranked atop Division I schools in attendance, and Hawaiʻi was the first school to have its home matches televised. During that period, UH began charging admission, and women’s volleyball became a revenue-generating sport. Moniz-Kahoʻohanohano’s tireless efforts helped the beach volleyball gain NCAA championship status.

“Beach volleyball would not exist at the University of Hawaiʻi without Marilyn Moniz-Kahoʻohanohano; in fact, it is easy to argue the sport would not exist in the NCAA without her,” said UH Athletics Director David Matlin. “As a prominent member of the NCAA Committee on Women’s Athletics, Marilyn helped jump-start beach volleyball, then known as sand volleyball, from an emerging sport to the NCAA‘s 90th championship sport within a record four years.”

Moniz-Kahoʻohanohano is the third member of the UH ʻohana to gain the distinction, joining Deitre Collins-Parker (2008) and Dave Shoji (2010).

The other three inductees in the AVCA class of 2021 are coaches Jim McLaughlin, Jim Stone and Beverly Williams.