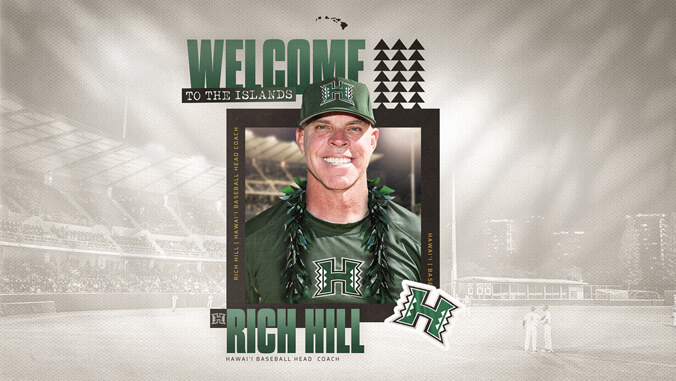 Rich Hill has been named the new head coach of the University of Hawaiʻi at Mānoa baseball program. Hill is the program’s thirdhead coach.

“I’m thrilled to welcome Rich, Lori, Robbie and Lindsey to Hawaiʻi, the university, and the UH Athletics ʻohana,” UH Mānoa Athletics Director David Matlin said. “We are excited for this new chapter of Rainbow Warrior Baseball to begin with Coach Hill at the helm. He is a high-energy coach who has a proven track record with over 1,000 wins in 35 years of coaching. It was evident after speaking with those who know him best, Coach Hill is a man of integrity and high moral values, who has a plan for success and vision for the future of Hawaiʻi baseball. In addition, what made Coach Hill the perfect fit is his affinity to the islands as a frequent visitor and he knows and understands the baseball culture in Hawaiʻi.”

Hill comes to Mānoa with 35 years of head coaching experience, the last 23 were at the University of San Diego (USD). Hill brings a head coaching record of 1,079-738-4 (.594) and most recently led the Toreros to a 33-12 season and a second-place finish in the West Coast Conference in 2021.

“I am beyond humbled and honored to serve the University of Hawaiʻi as the next head baseball coach,” Hill said. “I have so much respect for the proud tradition of Rainbow Warrior baseball and feel blessed to be part of this program. From what Coach Les started and Coach Trapasso built upon, to the great players past and present, it is truly a special culture. I especially want to thank President David Lassner and Director of Athletics David Matlin for giving me and my family this opportunity of a lifetime. They have been phenomenal throughout this process. We look forward to embedding ourselves in the community and bringing our brand of tough, fundamentally strong, winning baseball to the great state of Hawaiʻi!”

Hill became one of the youngest coaches in collegiate history to reach 500 career victories in 2003, taking USD into postseason play and a second consecutive NCAA Regional appearance.

For more on Hill go to the UH Mānoa athletics website.