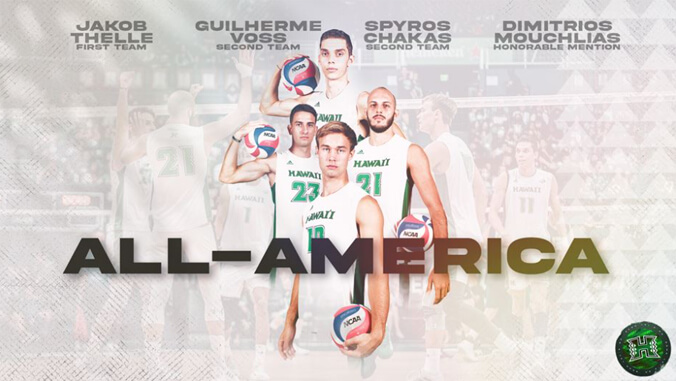 Sophomore outside hitter Spyros Chakas and sophomore middle blocker Guilherme Voss were selected to the second team, while sophomore opposite Dimitrios Mouchlias was honorable mention. This year marks the sixth consecutive year in which at least four UH players received All-America recognition.

In addition to Thelle, Chakas and Voss were also first-team all-Big West recipients. Chakas is in his first season as a full-time starter. He is second on the team in kills (3.25) and aces (44), and leads the team with 17 double-digit kill matches. Voss ranks No. 2 nationally in blocking at 1.36 blocks per set while also averaging 1.89 kills per set, hitting .487.

Mouchlias leads the team with a 3.59 kill average, hitting .351. He also ranks third with 30 aces and fourth with 0.91 blocks per set. The opposite has reached double-figure kills in 15 matches this season.

The Rainbow Warriors are chasing their second-straight national title in the NCAA Championship Tournament in Los Angeles. Their first match is May 3, against North Greenville University.