The Ruth Crymes Memorial Grant was established in memory of Professor Ruth H. Crymes (Whitten), who was killed in an airplane crash in Mexico City on October 31, 1979. At the time, she was Professor of ESL and President of International TESOL. She was on her 17th mission as TESOL President to address a meeting in Mexico City.
The following quote from Professor Virginia French Allen’s obituary (TESOL Quarterly 14, 1, 1980) may serve as an introduction to this one-of-a-kind person:

“She was in all ways a gentlewoman—quiet, understated, low-keyed. In the flood of testimonies from students, colleagues and friends the world around, one reads of her ‘aura of calm,’ her ‘dignity and poise,’ her ‘taking everything in stride.’ The least theatrical of leaders, antithesis of temperamental prima donna, Ruth had a harmonizing influence on people. Her presence unified and steadied others’ minds. That she has been made a focus of debilitating grief is one of the somber ironies. There was nothing somber about Ruth Crymes. She had a quick, perceptive humor, never cynical or unkind. Her voice was warm, with a distinctive lilting cadence. She wore colors as sunny as the islands where she lived and taught for nearly thirty years.” 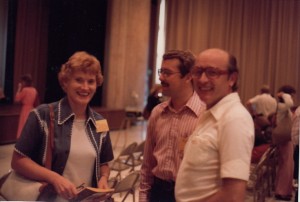 Professor Crymes initially joined the faculty of the English Department of the University of Hawai‘i in 1958, and moved to the Department of English as a Second Language (ESL) when it began in 1960. In 1965, she received her PhD from Columbia University. Dr. Crymes was chair of the Department of ESL from 1972 to 1975. For five years, she was executive secretary to the Hawai‘i Council of Teachers of English. She was also editor of the TESOL Quarterly for five years, and co-edited three volumes of On TESOL. Dr. Crymes was a recognized scholar in the field of English syntax. For many years, she worked closely with the State of Hawai‘i Department of Education on ESL-related matters.

The Memorial Grant is administered by a board of trustees—members of the Graduate Faculty of the Department. Income from the grant supports full-time degree-seeking students with expenses such as travel associated with conference presentation and research, and registration for conference presentation. The Grant also created the Harry Whitten Prize for Scholarly Excellence, awarded to recognize outstanding theses and scholarly papers. Mr. Whitten, Professor Crymes’ widower, was a benefactor of the Grant.

Donate to the Ruth Crymes Memorial Grant Endowment
Click on Enter a Fund Account Number, then enter “20099693” in the Search for a fund by account number field.

The Department of Second Language Studies has a number of scholarship funds that support student research and conference travel. Descriptions of these funds, their purposes, and application procedures and materials can be found at the following links.